COVID-19 is not going away and we are going to be living (and dying) with it for YEARS!!!

south african government decided to use the state of disaster legislation to suspend some of the constitution and take oversight control away from the South African Parliament. – declaring the covid-19 virus as a “disaster” INSTEAD of an EMERGENCY is not constitutional and is not correct (as it has not yet been a disaster) or even legal. One can understand that the south african government did not choose “State of Emergency” because then the Government would have been CHECKED by parliament, they would have to actually report on their actions and progress and they may even have to actually create valuable regulations and not deliver shit regulations as they are doing now)

the south african government has now CREATED an economic disaster and a small group of people has taken over complete “control” of south africa and they are refusing to give up their power.

NOT required: Small group of stupid or ignorant or power hungry DESPOTS (or what do you call these people?) making silly, stupid and ignorant arbitrary laws (like not being able to buy open toed shoes) and displaying www.sacoronavirus.CO.ZA on every domain name in south africa (among all the other really and truly lazy and stupid things to do)

So, is South Africa is going to be in a “STATE OF DISASTER” forever? Similar to BEE, DISASTER is never going to go away, it seems now…

I am very sure that this loss of my freedom is not constitutional. In fact, this never ending “state of disaster” authoratarian state situation is untenable and unacceptable and as the south african government is creating a state of disaster with the decimation of the south african economy, the effects of this autharatarianism will be terrible on the people of the country.

Is the South African Government is only implementing and continuing with the state of emegency in order to be a nanny state and turn south africa into a non democratic authoratarian country? or why else?

why is the south african government not lifting the state of DISASTER completely? on covid-19 – which will be with us, maybe FOREVER, maybe for some years, maybe for decades, truth is: no person knows. What is known is that we cannot live not knowing if we are living in a dictatorship or a democracy. If south africa is now a dictatorship, i cannot be writing this shit as i will be killed, so i have to know???

also, what i do not know: why is the south african government now killing poor people by forcing soup kitchens to close and cases of malnutrition in little children increasing hundred fold at hospitals?

for those of you that do not know what the South Korean Government did in February, here is a short list:

2. track & trace all cases and all contacts (also partnering with cell companies and credit card companies)

3. sms text messages to their citizens – containing REAL INORMATION (not the crap and shit the south african government is sending out to its citizens, stuff like: covid-19 is dangerous stay in your home, 15 million times…) WTF??? South Korea text message: 58 year old male bank manager visited fashion shop 17 and has tested positive – they send thissms ONLY to people in close proximity or who were in close proximty to that 58 year old bank manager and NOT THE ENTIRE POPULATION.

So, what South Africa is now doing is stopping the sales of open toed shoes. FUCK, how STUPID are those in power?

What is this level 4 and level 5 and level 3 and level 2 SHIT??? who the fuck is thinking out this bullshit? Those in POWER in South Africa are also STUPID? Ignorant? Control freaks? What???

How the fuck is this level shit helping south african people on the ground?

Why are you killing little children?

YOU want to do everything yourself as a “government” you want to SHUT DOWN civil society, close soup kitchens and control open toed shoes, BUT your actions, decisions and non actions ARE KILLING LITTLE KIDS???

Change course or history will remember you as one of the STUPID politicians, same as that fucking American Clown. – It is already so bad for that fucking clown that I do not even have to say his name. In twenty years from now – it is only going to get worse.

So, what is your legacy?

The South African Government is FORCING all websites to display a link to a COMMERCIAL domain name (co.za) operated by two companies with link marketing, AND the fucking stupid website is BROKEN as it is non functional. the South African idiots are PAYING an AMERICAN company $$$ to keep the website displaying some saved or plain text version of it.

here is the link on this “landing page” www.sacoronavirus.co.za

The South African Government are idiots and control freaks and authoratarian asseholes on so many fucking levels. here is a screenshot of 9:13 am on a SATURDAY. WTF??? 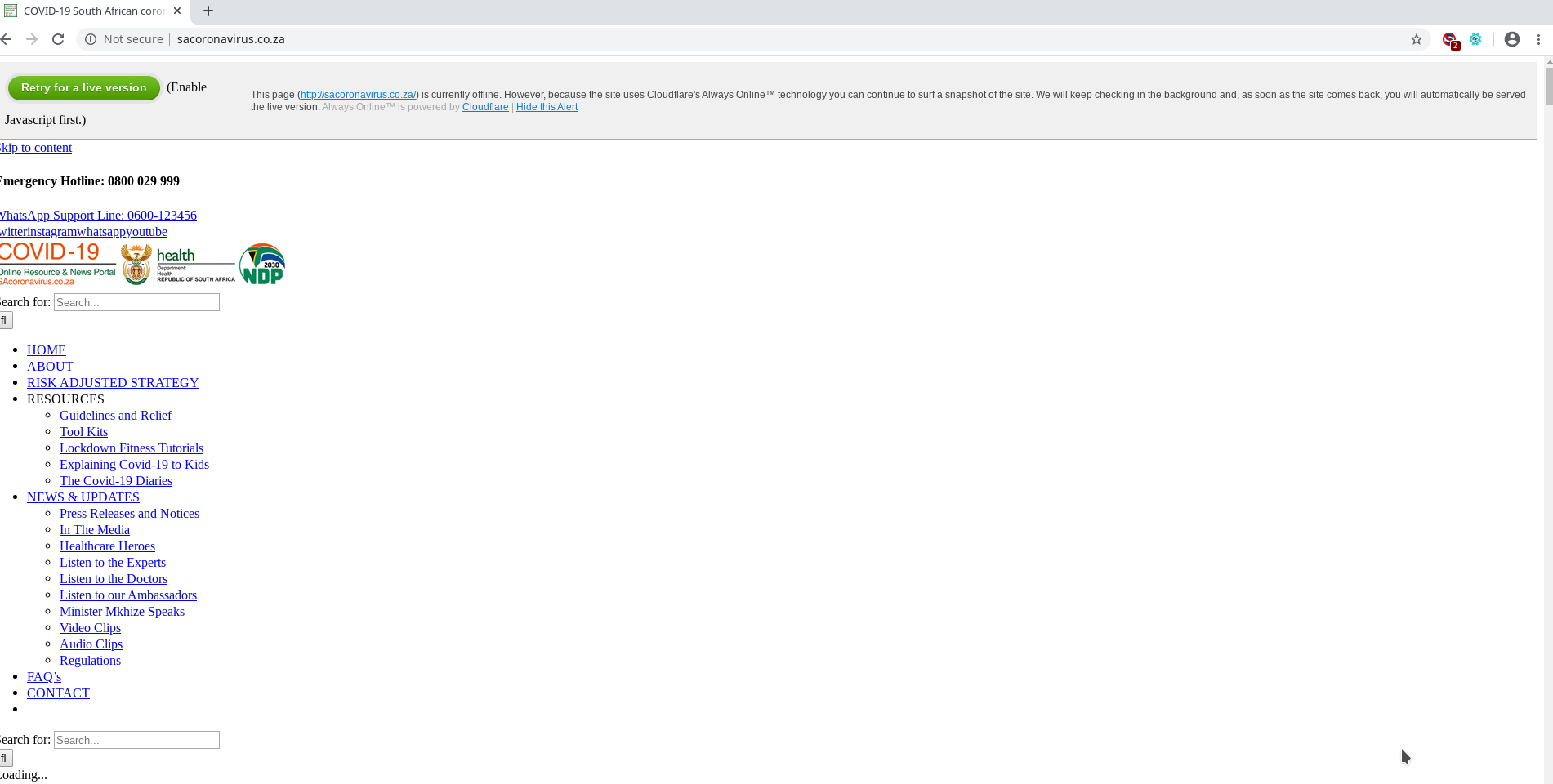 Justice not seen to be done

oreo and the white gooeye center

Do you live in a shithole?

most racist country in the world fucked equally by coronavirus

dexamethasone, the constitution of south africa and a camel

apartheid is alive and well and living in south africa

flatten the curve and big data