the front page of the 9th of december issue of the economist says a thousand words. 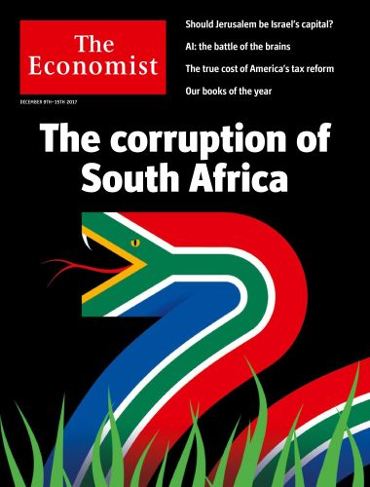 news24 reports that: “A docket has been opened against Jacques Pauw – NPA”

the economist says: “SOUTH AFRICA’S Constitutional Court may be the world’s most emotionally powerful building. The courtroom is built with the bricks of the Old Fort prison, where both Nelson Mandela and Mahatma Gandhi were held. A glass strip around the courtroom, allowing passers-by to see in, represents transparency. Above the entrance, the values of the constitution are set in concrete in the handwriting of the first constitutional judges after apartheid—including the childlike script of Albie Sachs, who had to learn to write with his left hand after the white regime’s security services blew off his right arm. In painful contrast with its uplifting setting, a recent conversation between an Economist journalist and an official working in the building was, at the official’s request, conducted outside and, as a further precaution against surveillance by today’s security services, the journalist was asked to leave her phone inside. It is a measure of how far South Africa has fallen from the ideals it embraced when it was reborn after apartheid.

Under President Jacob Zuma, the state is failing. Contracts are awarded through bribes and connections; ruling-party members murder each other over lucrative government jobs; crooks operate with impunity.” – the link to the article is here

we live in exciting and interesting times….

At least half of all Americans are complete idiots

is it kak to be zuck?

are you a chicken or maybe a duck?

Google on wrong side of the force

the day when the property bubble will burst